Usually when I research a story I find another. While researching Captain Kittredge who was killed in action during the Great War, I learned he had a grandfather who served in Civil War. His name was America Walton.

America Walton was born in Franklin Plantation, Maine in August of 1835. His family moved to Peru, Maine when he was nine and then on to Lowell by himself in 1856. He worked at the Lowell Bleachery and joined the Company B of the City Guards. He must of resigned from the 6th Massachusetts because he is not listed on the roster in 1861 and in May of 1861 he went to Patten Maine where he joined the 8th Maine Company B Infantry. In 1863 while on furlough he married Sophronia Dow. 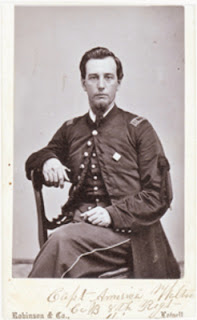 He was involved in several battles and was shot twice. He was at Appomattox when Lee surrendered to Grant on April 9, 1865. He was promoted often and ended up a Captain in 1865.

After the war he was an active member of G.A.R Post #120 (James A. Garfield). At a meeting celebrating the 50th anniversary of Lee's surrender at Appomattox he was the only living person in Lowell who had witnessed the surrender.

Unfortunately, he lived long enough to see his grandson, Captain Paul E. Kittredge killed in action in World War One.

He died in Lowell March 15, 1919 and is buried in Edson Cemetery. Our own Captain America.

Update: Thanks to Walter Hickey, Historian Extraordinaire we have confirmation that America Walton was a member of the Massachusetts 6th Company D from 1857-1859.
Posted by Eileen at 10:14 PM