Lieut. James Scondras was born in Lowell to Greek immigrants Peter (Spiros or Speros) and Katina (Ivos) Scondras. They raised their family at 287 Dutton Street across the street from Lowell National Park's parking lot. His dad owned the De Lux Cafe on Merrimack street. Jimmy or "The Chief" was one of nine children and one of the best athletes the city has ever seen.

He graduated from Lowell High School in 1937, one year at St. John's Prep in Danvers and graduated from Holy Cross in 1943. He enlisted in the United States Marine Corp Reserves. He was killed in action on Iwo Jima on February 1945 at the age of 25. He was awarded the Silver Star for his previous action in Guam when he wiped out a Japanese machine gun nest with an expert toss of a grenade.

His brother David was killed in action in France in November of 1944. In March of 1949 the bodies of James, David and their first cousin Costos Ivos who was shot down over Germany were returned to Lowell for burial in the Westlawn Cemetery.

Please remember the sacrifice that the Scondras & Ivos families gave for our freedom. 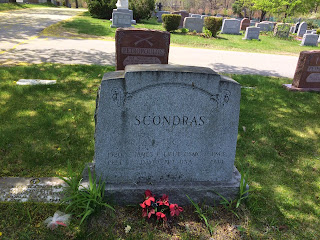 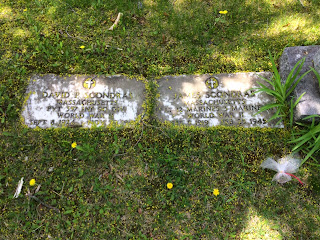 This concludes my series on Greater Lowell Iwo Jima heroes who died over seventy years ago. It was my honor to remember them.
Posted by Eileen at 6:33 PM No comments:

Howard R. Patrie was the son of Mr. & Mrs. Henry Matilda Drougue) Patrie of 179 Hale Street in Lowell. His father was a veteran of the Great War. He was a communicant of St. Peter's parish on Gorham Street. He was the youngest of nine children and had attended the Linoln and Butler schools.

He enlisted in the U.S. Navy at age seventeen. Last his parents heard he aboard an aircraft carrier. He was killed during the invasion of Iwo Jima on March 19, 1945. He was buried at sea. He was only 19 years old. 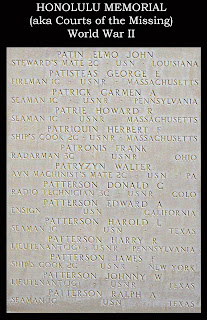 He is the only Lowell service member killed on Iwo Jima that was not a U.S. Marine. Please remember young Seaman Howard Patrie and his sacrifice.

Posted by Eileen at 9:53 AM No comments:

Pfc Theodore F. Maguire was the son of Mr. and Mrs. Philip (Alice Reidy) of 31 Prospect Street in Lowell. He was a graduate of St. Peter's School and Lowell High School. He was a Lowell Sun paper boy. He enlisted in the U.S. Marine Corp. May 27, 1943. His nickname was Teddy.

He was killed in action on Iwo Jima on March 1, 1945. Besides his parents, he left behind four brothers (three serving our country in Germany, The Philippines and England) and three sisters. He was 21 years old.

A pro-burial service was held for him on April 7, 1945 at St. Peter's Church on Gorham Street. He is buried in the National Memorial Cemetery of the Pacific in Honolulu. 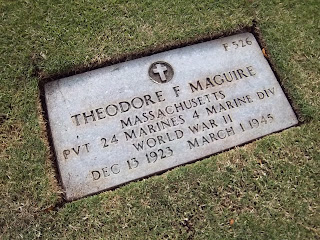 Posted by Eileen at 2:08 PM No comments: