Honor Roll in Tewksbury in WW1

There is a memorial in Tewksbury center for the lives lost in WW1, WWII and the Korean War. It lists three names from Tewksbury in the Great War. It was dedicated June 1, 1948. The following details the lives of these three men.

Dexter was born in West Andover on March 29, 1890 to Edward Webster Bailey and Martha A. (Miller) Bailey.  His father was one of the first rural mail carriers for the Lowell Post Office. His grandfather was a civil war veteran from the 13th Vermont Infantry. His great grandfather fought in the Revolutionary War.
His family lived at 1563 Andover Street in Tewksbury. He graduated from Lowell High School in 1906 and was awarded the Carney Medal. He went on to graduate from the Massachusetts Agriculture School (UMASS Amherst) in 1910 and was a member of the ROTC. He was a dairy chemist at Iowa State College and joined the service from Iowa. He was assigned to the Sanitary Corps on March 4, 1918 and stationed at Camp Greenleaf and Camp Bowie in Forth Worth, Texas.

He died December 2, 1918 at Fort Bowie in Texas from pneumonia at the age of 28. He left his wife, Grace Althea (Revelle) of South Dakota, his parents, his sister Clara Ellen Bailey and brother William Irving Bailey who owned the North Tewksbury Garage on Andover Street. His death certificates indicates his burial in Lowell.

A square at Andover and North Streets in Tewksbury is named in his honor.

Private Everett Earl Fulton
Everett was born June 13, 1899  in Littleton, MA son of James and Jennie (Lunergan) Fulton. He enlisted May 1, 1918 in R.A. Cavalry, unassigned. He died October 14, 1918 of influenza at Fort Bliss in Texas. Before the war Everett was employed in chemical works.

In the 1920 census the family was renting on Main Street in Tewksbury. He was survived by his large family, parents and brothers Harold, James, Robert, Walter, Claire (Guyette), Lottie (Gilchrist), Treva (Hartley) and Estelle (McLaughlin). The family stayed in the greater Lowell area. He is buried in the Tewksbury Center Cemetery.

A square at Main Street and Salem Road in Tewksbury is named in his honor.

Dennis was born in Philadelphia, PA October 29, 1895. He grew up in Birchville, PA and registered for draft while he was living in Somerville, MA. He started his employment with Tewksbury State Hospital on November 17, 1917 and left to join the war effort on April 25, 1918. He was one of 75 employees of the 320 employees at the Tewksbury State Hospital to join the war effort. He worked at the men's hospital on night duty and lived there too.

He was in the AEF 76th division. He died in France on April 28, 1919 of disease. I've seen him listed as a cook and as a member of the medical corps. He is buried in St. Patrick's Cemetery in Middletown, PA.
Although he was not a resident of Tewksbury very long he is remembered. A square at East and Chandler Streets in Tewksbury is named in his honor.

Although not on the monument in Tewksbury Center, Gerald Silk has a square named for him in Tewksbury. He was born July 25, 1893 in Tewksbury and he grew up at 1411 Andover Street in Tewksbury before moving to Lowell with his family. He was killed in action July 18, 1918 in Belleau Woods in France serving with the Yankee Division. His brother, Bruno Silk also serving died during the war and died of disease September 21, 1918. Bruno is buried in the Edson Cemetery in Lowell and Gerald is buried in the Aisne Marne Cemetery in France.

A square at Andover and Fiske Streets in Tewksbury is named in his honor. He also has a square in Lowell in his honor at Bridge & Hampshire Streets.

Thank you Tewksbury for your sacrifice during the Great War and we remember them. 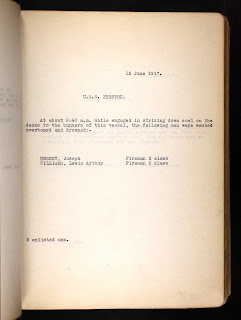 Joseph Hebert was married to Blanche (St. Amand) living at 72 East Meadow Road in Lowell. They had a daughter Doris born in 1916 and a son Joseph born in 1918 after the sailor's death. In July of 1933, Mrs. Blanche Hebert made the journey overseas as part of the Gold Star Mother's Pilgrimage. She sailed out of New York on the USS President Harding. Mrs. Joseph Hebert died on May 18, 1977 leaving her two children, Joseph Hebert & Doris Martin and five grandchildren.

Please remember Joseph Hebert, his family and the sacrifice they all made.

The Massachusetts National Guard Old 9th Regiment Company M was sent to Newburyport to guard the bridges on May 1st, 1917. They guarded Newburyport's bridges until July 1st when they were sent to Camp McGinnis in Framingham for training.

On July 1st, Pvt George W. Gravelle fell off a train in Newburyport and was killed. He was nineteen years old. He never made it to Framingham never mind France. Instead his body was returned to Lowell for his funeral.

He was born in Lowell on September 8, 1898 the youngest child of Charles and Lucy (Chabot) Gravelle. He was survived by five brothers, Joseph, Alfred, John, Arthur and William and three sisters, Rose Parks, Mabelle Whalley and Dorothy Welch. His mother died in 1914 and his father died in 1918. We worked as an apprentice iron moulder.

Please remember Pvt George Gravelle and his family's sacrifice.
Posted by Eileen at 10:27 AM No comments: