I had the honor to present a talk at the Pollard Memorial Library Sunday on the 99th anniversary of the Armistice on behalf of the Lowell Historical Society. We had a great turnout of about 52 people. I thank everyone that attended.

During the question and answer period there was a lot of discussion about the draft that was instituted. The Selective Service Act was passed on May 18, 1917. The first registration was for men between the ages of 21 and 31. The second  included those who became 21 after June 5, 1917 and a third registration for men age 18 to 45. Walter Hickey helped clarify this. Thanks Water!

During this time in the United States, African Americans were segregated in the armed forces. During the draft their race was noted and the bottom corner of the draft card was torn off to identify them as African American. Thanks for noting that Brian Liston!

Another of the participants at the talk suggested that perhaps one of the Lew descendants registered for the draft. Thank you for suggesting that Thomas Malone!

I found Gerard Nelson Lew's draft registration while he was living in Carney's Point, New Jersey working as a munition worker.  Note the torn off corner. During WW1 he was a war worker for the YMCA. His is a first registration draft card. 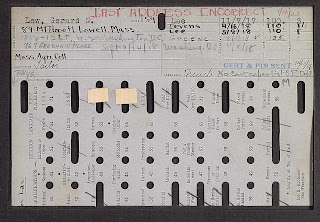 During the war he worked for the YMCA ending up in Washington DC. He later moved to Chicago and was a postal worker.  He was one of the co-founders of the DuSable Museum of African American History in Chicago. He died in 1965.

I also found his brother Harry (Bucky) Lew's draft registration card. The third registration period did not have the cut off on the bottom to denote African American. I don't believe he served in the Great War.
Draft registration cards are extremely useful in genealogy research. You can find them on www.familysearch.org for no cost.

Posted by Eileen at 1:01 PM No comments: