The Korean War and Lowell Prisoners of War/Missing in Action

The Korean War is sometimes called the Forgotten War. Before WW2 the Japanese ruled in Korea. After World War 2 the allies divided Korea into North and South around the 38th parallel. Supporting the 2 new Koreas were the U.S.S.R (Communists)  in the North and the United States (Democracy) in the South. In 1949 the U.S.S.R. and the U.S. pulled out. Shortly thereafter the North invaded the South. The United Nations and the United States came to the support of South Korea. China aided North Korea.

Two Lowell, MA Army Corporals, Francis Joseph Krygowski and Thomas Harding, Jr , members of Company I, 3rd Battalion, 29th Infantry Regimental Combat Team were sent to fight in Korea. They participated in one of the early battles near Hadong, South Korea. It did not end well for the Americans.

They were originally listed as "Captured but Not Accounted For" on July 27, 1950. Later they were listed as Prisoners of War and then Presumed Dead. Their bodies have not been found. Their names are inscribed on the Courts of the Missing in Honolulu. 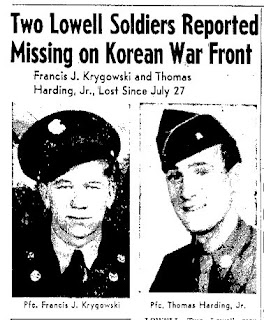 Francis J. Krygowski was the son of Mr. & Mrs. Krygowski of 121 Concord Street. He was a graduate of St. Stanislaus School and attended Lowell High School.

Thomas Harding, Jr. was the son of Mr. & Mrs. Thomas Harding, 37 Bartlet Street. He enlisted in the Army on his 17th birthday October 5, 1946. He was a graduate of the Immaculate Conception grammar school and attended Lowell High School.

Lieut. Alexander Makarounis of 548 Fletcher Street, Lowell, MA,  was the Company Commander and was  taken a Prisoner of War. He ended up escaping the Death March from Seoul to Pyongyang and returned home to a grateful family. Only 33 men out of 376 men survived. 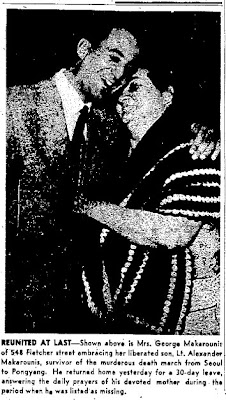 He testified before the U.S. Senate after the war about his experience in North Korea. His story was published in several magazines. He died July 30, 1994 in Lowell at the age of 71. 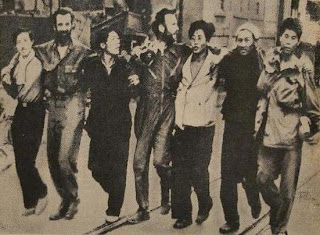 At the end of the Korean War the dividing line of North and South Korea was settled at the 38th Parallel.  The same place it was at the start of the War. The United States has maintained a strong military presence in South Korea and they are one of our strongest allies.

Thank you all for your service. You are not forgotten!
Posted by Eileen at 3:45 PM 1 comment: