Oliver Moulton Chadwick was born in Lowell on September 23, 1888 to Austin Kilham Chadwick and Julia May (Moulton) Chadwick. His father was the President of the Lowell 5 Savings Bank. Oliver went to Lowell schools and then, as was family tradition, he graduated from Phillips Exeter Academy in 1907. He graduated from Harvard College 1911, where he was a star athlete and Harvard Law School in 1914. He was employed by Stone & Webster in Boston. He lived at the corner of Nesmith and Oak Streets in Belvidere with his parents.
He was eager to join the war in France. He tried to join the Canadian Army but was unable to as a U.S. citizen. He signed himself up at his own expense at Curtiss Flying School in Newport News, VA and traveled to France where he enlisted January 17, 1917 in the Lafayette Flying Corps, French Army N.73 Groupe de Combat 12.

World War One was the first war that used aircraft for combat. The planes were open cockpit with no armor. A combat pilot had an average life expectancy of 40 to 60 hours airtime before being killed. Oliver was deemed to be one of the most skilled in his unit.

He was shot down by a German fighter pilot in Belgium near the front line on August 14, 1917 while on patrol. He was twenty nine years old. He was survived by his parents and his sister, Frances who married his Harvard roommate, James B. Long. He was also a cousin of Congressman John Jacobs Rogers.
The Germans recovered his body between the French and German lines near his plane (SPAD), probably searched it for intelligence and he was buried there near Bixschoote, Belgium. His grave was marked by his friend and fellow flyer Charles J. Biddle.  Charles Biddle would survive the war and dedicate his book, "The Way of the Eagle",  to his friend Oliver. He lay in that grave alone until 1928 when he was moved to the Lafayette Escadrille Memorial Cemetery that his family contributed money to have the monument built and were present at the dedication. 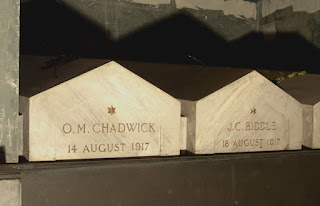 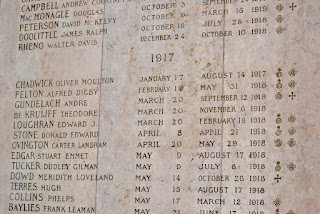 Listing on the Lafayette Escadrille Memorial in Marnes-la-Coquette, France

He was awarded the Croix de Guerre with silver star June 7, 1919, also awarded war medal by Aero Club of America in recognition of valor and distinguished service January 1918, Camp Chadwick, a Boy Scout camp in Dunstable was named for him and a centotaph in the Exeter Cemetery in Exeter, NH. Camp Wah-Tut-Ca in Northwood, NH also has remembrances of him. His papers are held with the Exeter, NH Historical Society.

Please remember this brave airman who gave it all. Lowell thanks you.

Posted by Eileen at 9:52 PM No comments: