I'm scanning some photos that belonged to my husband's grandfather.  Among them was a small photo labeled "Fitzie" 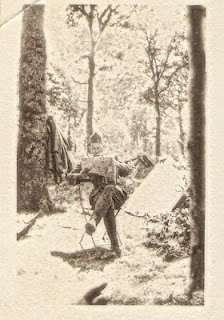 William Patrick Fitzgerald was the commander of Company M of the 26th Yankee Division.  He was killed in action in the fighting at Vaux.  In a letter Irving wrote home:

I suppose you are looking blindly for mail from me, but to tell you the truth, I have been to busy lately that I haven't even had time to sleep, because it certainly wasn't safe to so go sleep where we were for fear we should never wake up again.

Things were certainly flying around for a while, take it from me. I came to near never seeing you people again that there was no fun in it. Quite a few of the boys are gone now. It is certainly too bad. We had quite a fight over here and the men in Co. M showed the boche that they were there all right, although we lost the best lieutenant in the regiment and Ma, he died in my lap. Just think of it!

He and I and a fellow by the name of Finnegan who lives in Gorham st. near Davis square, started out after a holeful of Germans, The lieutenant and I were in a shell-hole. Finnegan was right beside us. The lieutenant threw two bombs and was going throw a third when they saw us and shot him.

He fell on me and I was pretty shaky for a second, but soon got my nerves together and Finnegan and I started after them. All of a sudden I heard Finnegan's rifle shoot and then I saw the German who shot the lieutenant fall. Finnegan shot him through the chest—killed him as dead as a door-nail.

Then we started after the rest. We crawled in pretty close and the Germans saw us coming. They knew that if they didn't give up they would all be killed. So they came out with their hands up to Finnegan and myself. They were all crying, afraid we were going to kill them. We would have done so only there wasn't enough ammunition in my rifle so we took them prisoners, seven of them. So you see I didn't come over here for nothing.

Well, mother, I have good news for you this time. I am appointed the company clerk now and take care of all the company's paper work, which is some job just now as everything is upside down on account of being in the trenches. I have a typewriter and everything that goes with a real clerk, so you see I am slowly going up and will be at the top soon.

Tell grandpa I thought of him when I was capturing the prisoners and if I had some more bullets I would have shot one for him.


In the photo you can see the tents where they slept in the woods.  Reading a newspaper sitting on a chair with his coat hung on a tree.  Guns at the ready..........
Posted by Eileen at 1:21 PM No comments: