The highest ranking General with Lowell roots is Hoyt S. Vandenberg.  He was born Jan 24, 1899 in Milwaukee, WI but spent his childhood years in Lowell.  He attended the Moody Grammar School and graduated from Lowell High School Class of 1917. The Vandenberg Esplinade by the Merrimack River in Lowell was dedicated to him in 1977 by Gov. Dukakis. 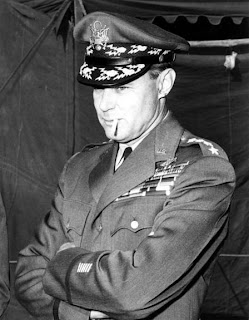 After he left Lowell he went to West Point where he graduated 240th in his class of 261. Fortunately, he became an excellent airman. During a time when flying was very dangerous he was a great leader. The men really liked him. He became a 4 star General, Commander of the US Air Force and a member of the Joint Chiefs of Staff. He was the second director of the C.I.A. One of his legacies is that he picked out the blue color of the Air Force uniform with the silver buttons.

In 1948 his wife started "The Arlington Ladies" to honor veterans during the burials at Arlington National Cemetery.  A lady will always be present at each burial so that no soldier dies alone.  It continues to this day.

For his full biography see this link:  http://www.scribd.com/doc/39981102/General-Hoyt-Vandenberg-Biography 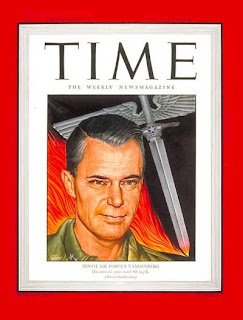 General Vandenberg is named for Eli W. Hoyt of Hoyt German Cologne fame. His mother's aunt, Mary A. (Ingraham)  was married to Eli W. Hoyt and she lived at 286 Andover Street in the matching house of Eli's best friend Freeman Ballard Shedd. The General had one brother and his name is Aaron Shedd Vandenberg but he went by the name of Shedd.  His middle name is in honor of Elis' best friend, business partner and neighbor Freeman Shedd.

Eli W. Hoyt died in Lowell February 9, 1887 of tuberculosis. His wife remarried Henry Felton in 1891. She continued to live at 286 Andover Street right next to her neighbor Freeman Ballard Shedd until her death in 1908. In 1909 to settle the estate an auction was held and the highest bidder was her niece's husband Collin Vandenberg! The family moved from Milwaukee to relocate to Lowell so that his wife could take care of her ailing mother (Nellie Ingraham Kane). Her mother died in 1910 but the family stayed in Lowell until after both boys graduated from Lowell High School. The house was sold again at auction in 1919 to Dr. Adam E. Shaw.  The doctor lived in the house and used  the carriage house as Shaw's Hospital on East Merrimack Street.

General Vandenberg died shortly after retiring from prostate cancer at Walter Reed Hospital on April 2, 1954 at the age of 55.  President Eisenhower attended his funeral. He is buried at Arlington National Cemetery with his wife. More information about his funeral can be found here:  http://www.history.army.mil/books/Last_Salute/Ch10.htm

Vandenberg Air Force Base in Lompac, California is named in his honor. His parents are buried in Lowell Cemetery. He is survived by a son, 2 star General Hoyt Vandenberg Jr. and Mrs. Gloria Miller.