Wesley Herbert Davis was born in Tyngsboro on October 10, 1919 to Mr. & Mrs. Wesley (Ruby I. Willett) H. Davis. Soon after he was born the family moved to Spencer, MA and he graduated there class of 1937. The family moved back to Tyngsboro where his dad bought a dairy farm located next to the Tyngsboro Country Club on Pawtucket Boulevard. Young Wesley nicknamed "Bud" or "Buddy" was a milkman and worked the farm with his dad.

He enlisted in Boston June 12, 1944 in the United States Marine Corp and assigned to the Fifth Division. On March 9th his family reported to the Lowell Sun that he spoke "of the dramatice rising of the flag on the volcano on Iwo Jima". He reported that his farm experience helped him dig his fox hole.

He was killed in action on Hill No. 362 on March 6th on one of the bloodiest fights of all. He was twenty five years old. He left his parents, three sisters, a brother and a fiance, Miss Virginia Goldwaite of Dunstable.

He was the first Tyngsboro hero to be repatriated on American soil. The entire population of Tyngsboro came to his funeral in April of 1948. He is buried near his home in the Sherburne Cemetery on Coburn Road.

After the war his father was active in civic politics and owned "The Dairy Bar" across from the Tyngsboro Country Club.

Please remember this Tyngsboro hero that was surely missed.
Posted by Eileen at 8:52 PM No comments:

Private Gerard Belley was killed in action on Iwo Jima March 4, 1945. He was the oldest son of Mr. and Mrs. Ulric (Albertine Guillemette) Belley of 61 Crawford Street in the Pawtucketville section of Lowell. He had attended St. Joseph's School and prior to his service was employed at the Wamesit Power Company.

He was a member of the Fifth Marine Division and was only 21 years old. He enlisted in May 1943.

In addtion to his parents, he was survived by two sisters Ella and Jeannine and a brother Normand. He is buried at the Long Island National Cemetery in Farmingdale, NY. The Cape Cod National Cemetery was dedicated in 1980.
Thank you for your service and your sacrifice. Lowell remembers.
Posted by Eileen at 1:18 PM No comments:

During World War II word reached Lowell quickly (compared to WW1) to notify the families when someone was killed in action. Joseph Edward Albert was killed in action on March 6, 1945 during the fighting on Iwo Jima. He was in the Marine Corp and had been serving for just about a year. He was drafted in Lowell, MA almost exactly a year before. He was a transfer from New York City where he had lived previously.

Private Joseph Edward Albert was born in Lowell on October 12, 1910 the son of Alfred and Alia (Brunelle) Albert. He was killed in action on Iwo Jima on March 6, 1945. The family lived in the acre section of Lowell and New York City. Joseph was 33 years old when he died in the Pacific. He had a 7 year old son Thomas E. Albert who was left an orphan when his dad died. He was the one that unveiled the plaques honoring the WW2 soldiers that line the Hall of Flags.

When Joseph Edward Albert died he was survived by his mother, two brothers Joseph Andrew Albert of New York City and Alfred Leo Albert of Lowell and a son, seven year old Thomas E. Albert and his aunts Mrs. Eugenie Lemay and Mrs. Alice Barlow. His mother died on September 19, 1950 and is buried at St. Joseph's Cemetery in Chelmsford. He graduated from St. Joseph  School and was employed at the Lowell Ordinance Plant.

He was killed during the fierce fighting on Iwo Jima. He left his son with no parents. His son grew up in Lowell, married and had two daughters. It looks like he had a full life. He died in 2010 at age 72. His dad is buried at the National Memorial Cemetery of the Pacific in Honolulu Hawaii. Please do not forget him. Lest we forget. 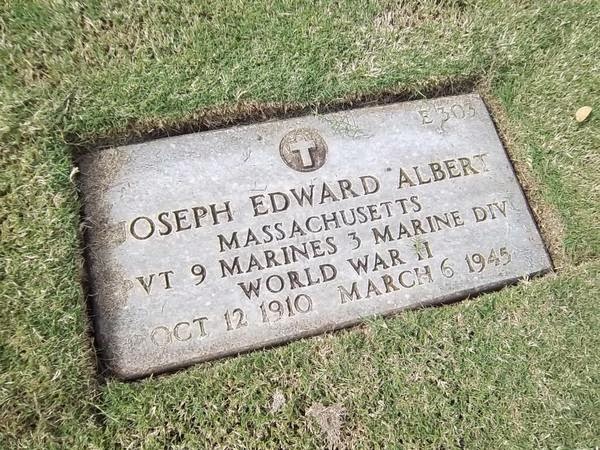 Shortly after the battle for Iwo Jima news came to Lowell about the personal losses of our young men. Seventy years ago Lowell mourned the loss of the following men killed in action:


Over the next month I plan on writing on each hero. We must not forget. It's been seventy years so many of their siblings and friends are gone.