Kearney Square in Lowell used to be called Merrimack Square.  It is named for Lieut. Paul T. Kearney killed in action in France October 3, 1918.  It is one of the most historical and prominent spots in the city.

Lieut. Paul T. Kearney was one of five sons of John Kearney and the late Elizabeth (Welch) of 142 Third Street in the Centralville section of the city.  Mr. Kearney  proudly displayed his 5 star service button.  Lieut. Kearney graduated from Green Grammar School, Lowell High School and Tufts.  He was employed by Hood Milk and Company in Boston.  He was 28 years old.  His body was returned to Lowell for his funeral and burial on August 8, 1921.

While driving through St. Patrick's Cemetery recently, I noticed the impressive stone for the Kearney brothers.  Four of them are buried together. 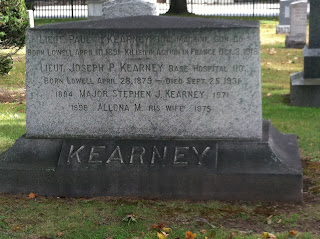 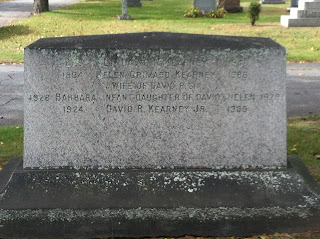 Thank you for your service.

Posted by Eileen at 3:12 PM No comments: