Benjamin Pierce was born in East Chelmsford, Massachusetts (now Lowell) on Christmas Day 1757 to Benjamin and Elizabeth (Merrill) Pierce. The house no longer exists but it would be near the intersection of Jenness and Chelmsford streets. Benjamin's father died when he was six and he was taken care of by his uncle Stephen Pierce who was married to Bessie Bowers. His mother remarried Oliver Bowers. He attended a little red school house at School and Westford streets.
Benjamin was 18 years old and plowing his uncle's land near the intersection of Powell and B streets on April 19, 1775 when word arrived via courier that shots were fired in Lexington and Concord . He hitched his steers to a tree stump, unhooked the plow and grabbed his uncle's gun, some supplies and headed to Concord. By the time he arrived on foot they were gone and he made his way to Cambridge. He enlisted in the Army and fought at Bunker Hill.


From a letter of Benjamin Pierce of Ford's Company, later of Hillsborough, N.H.: "I went into the Hill about 11 o'clock, A.M. When I arrived at the summit of bunker's Hill I saw two pieces of cannon there standing, with two or three soldiers by them, who observed they belonged to Capt. Callender's Company, and that the Captain and his officers were cowards and had run away. Gen. Putnam there sat upon a horse * * * * and requested our company, which was commanded by Capt Ford, of Chelmsford, Mass., to take these pieces and draw them down. Our men utterly refused, and said they had no knowledge of the use of artillery, and they were ready to fight with their own arms. Capt. Ford then addressed his company in a very animated, patriotic and brave strain, which is characteristic of the man. The company then seized the drag-ropes and drew them to the rail fence about half the distance from the redoubt on Breed's Hill to Mystic River." - "The History of Chelmsford"  by Wilson Waters


Benjamin Pierce stayed in service until the end of the war in 1784. After Bunker Hill, he spent the rest of the war in Colonel Brook's regiment. He participated in campaigns in New York and wintered with Washington's army at Valley Forge. He held the ranks of common soldier, corporal, sergeant, ensign and lieutenant. He stayed in the army until they disbanded at West Point. He stayed in service attaining the rank of Brigadier General back home.

At the end of the war he returned to Chelmsford to live at the corner of Chelmsford and Midland streets. He had been gone for nine years. He earned $200 for his service and went north to the wilderness of Hillsborough, New Hampshire where he purchased 50 acres of land with a log hut for $150. He went to work clearing the land. He married Elizabeth Andrews who gave birth to his daughter Elizabeth but his wife died four days later from complications from childbirth. Alone with a baby, Benjamin soon remarried Anna Kendrick of Amherst, NH. They would have 8 more children. Later he would purchase 200 more acres and built a mansion and tavern. It is a museum today as part of the Hillsborough Historical Society. 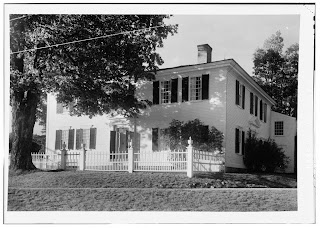 Benjamin Pierce was very active in civic affairs. He held many offices and was elected Governor of the state of New Hampshire for two terms in 1827 and 1829. His last official act was to cast an electoral vote for Andrew Jackson in 1832. He was an original member of the Society of Cincinnati. He died in Hillsborough, NH on April 1, 1839.

He visited Lowell many times during his life maintaining his family ties. As did his son, Franklin Pierce the fourteenth President of the United States. Franklin Pierce's wife was also related to Nathan Appleton. 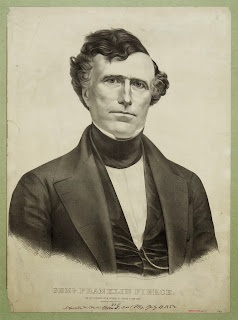 Benjamin Pierce was a great statesman and patriot with Lowell roots. His father and grandfather both lived and died here. The Pierce family, sold land in 1833 to the City of Lowell for the poor farm. This land is where Lowe's is located today.

Yes, they won last night but this story is about 1918. On September 11, 1918 the Boston Red Sox beat the Chicago Cubs 2-1 in the sixth game of the World Series. The world was at war. Baseball was not a big deal. 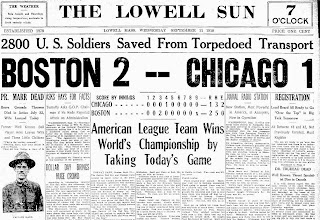 Mrs. Walter Marr finally learned that her husband had died July 22nd in France. He was killed in action near Tugny Woods. She hadn't heard from him in months and had been contacting the army in vain to learn what had happened to him. She feared the worst.

Walter Marr was born in 1884 in Lowell to Lawrence and Mary (Brennan) Marr. He married Mary Quinn and had three children; Leonard, Virginia and Marion. The family lived at 24 Smith Street. Walter reported for duty April 1, 1917 and went overseas September 16, 1917. He was a member of Company I, 102nd CT Infantry Regiment. He was killed in action July 23, 1918 near Trugny Wood in France.

Walter was a great amateur baseball player in Lowell. In the army he became a grenade thrower. His baseball experience helped him but this was dangerous duty. He came from a family of service. Three uncles served in the Civil War and two of them lost their lives during the war.

Walter's body was returned to the United States in 1921 for burial at St. Patrick's Cemetery. We remember the sacrifice that Walter Marr's family has made for us.

Posted by Eileen at 4:14 PM No comments: