When the United States entered the Great War the National Guard were deployed to guard bridges in New England. Pvt. Joseph F. Harding, an 18 year old soldier from Lowell, was assigned to the Mascoma River Bridge in Enfield, NH. This was a B&M freight train bridge.

On the day of April 21, 1917 Pvt. Joseph H. Harding was guarding the bridge. He was near some loud rapids of the river, sitting in a chair with his feet on the rails. He never heard the freight train coming. A neighbor, Ezra Lawrence of Enfield ran to him to try to save him. Ezra lived nearby with his wife and five children. They were both struck and killed.

Pvt. Harding was survived by his father, Harry Harding of 68 Branch Street, his brother Harry and his grandmother Mrs. Mary Harding all of Lowell. His mother had passed away in September of 1902.

Erza Lawrence was awarded the Carnegie Hero Fund Commission Medal in 1917. He left his widow and five children. He was a teamster and only 31 years old.

Rest in peace Pvt. Harding and Mr. Lawrence. You are remembered.

This is my first in my series of causalities of the Great War with Lowell connections.
Posted by Eileen at 8:26 PM 1 comment:

One hundred years ago today on April 6, 1917 the United States declared war on Germany. At the time the United States had a very small military. The National Guard was ready first. Lowell had the old Massachusetts 9th which had returned from the Mexican border in 1916. They became 26th Infantry (Yankee) Division, Company M of the 101st Infantry of the U.S. Army. They assembled at the armory on Westford Street.

Sumner H. Needham, met with the City Council to get men to sign up. He was the grandson and namesake of his grandfather who was one of the first to die in the Civil War on the march through Baltimore on April 19, 1861. 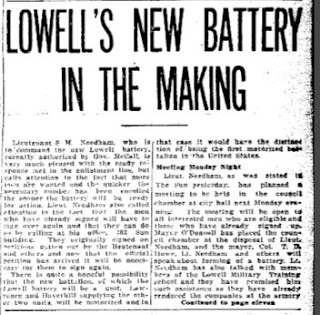 The armory was busy as  other companies were forming as the excitement to go to war was growing. 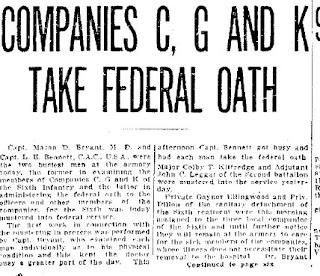 It would take some time to get trained and shipped overseas but we were in it now. Europe had been at war for three years but with the USA joining the allies things would be changing at last.
Posted by Eileen at 11:38 PM No comments: