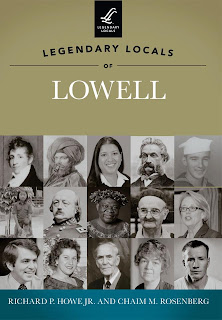 Dick Howe's book, Legendary Locals of Lowell published by Arcadia Publishing is now out.  You can purchase a copy at the Lowell Gallery on Jackson Street, Barnes & Noble in Nashua or on amazon.  I highly recommend it!

Our family contributed several photos including this one of World War One hero and my husband's grandfather, Irving Loucraft.   I've written previously of his exploits in World War One.  He was a member of Company M of the Yankee Division and was the Past Commander of the Lowell's American Legion Post 87. 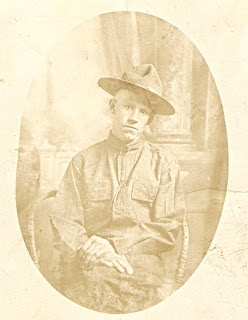 Dick will be having several book signings including one hosted by the Lowell Historical Society, Saturday, April 6th at 11:00 AM at the Lowell Telecommunication Corp on Market Street.  Hope to see you there!
Posted by Eileen at 9:30 AM No comments: 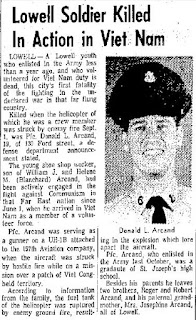 Donald Leonard Arcand was born February 13th 1946 in Lowell, MA to William and Helene (Blanchard) Arcand and lived at 130 Ford Street. Ford Street is now called Father Morissette Blvd. He was an outstanding athlete and graduated from St. Joseph High School Class of 1963.

He volunteered for the US Army in October 1964 and was a door gunner on a UH-1B "Heuy" Helicopter. One of the most dangerous assignments during the war. His helicopter was shot down and he was killed in action on September 1, 1965 in the Binh Duong Province in South Vietnam. His crew was protecting a convoy. He was a member of the 11B, 145th Aviation Battalion Regiment. It was his last mission of a 90 day tour. Donald was only 19 years old.

For his service he received the Gallantry Cross with 3 Palms, Military Merit Medal, Air Medal with 2nd and 3rd Leaf Clusters, the Distinguished Flying Cross and the Purple Heart (posthumously).

On September 9, 1965 his funeral was held at St. Jean Baptiste Church and he is buried at St. Joseph's Cemetery in East Chelmsford.

On May 25, 1969, Arcand Drive was dedicated following the Memorial Day parade.  Arcand Drive was created by the Northern Canal renewal area and the building of the J.F.K. Civic Center and the neighborhood where Donald grew up.  It runs from Merrimack Street at Monument Square to Father Morissette Blvd.

The first to die from Lowell in Vietnam is honored by a street running along the Ladd & Whitney monument that marks the final resting place of the first to die during the Civil War.  We remember his service and his sacrifice.
Posted by Eileen at 5:19 PM 1 comment: