The Lowell Doughboy Statue is located at the intersection of Fletcher and Willie Streets in Lowell, MA.  It was dedicated June 3, 1923 in an impressive ceremony attended by thousands of people.  The square is located in front of the current Lowell Firefighters club.  They have an impressive mural which gives the statue a unique look.  This location used to house the Marine Club, The Broadway Social Club and  Butler Volunteer Firemen.  It was the Broadway Social Club who was responsible for purchasing and dedicating this monument.

The monument honors 36 acre men who gave their lives during World War One.  Imagine 36 men from one small neighborhood paid the ultimate price.  This shows the impact this war had on the city of Lowell. 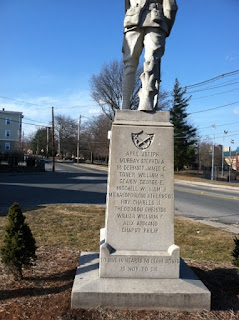 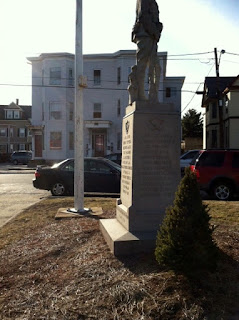 West side - "LEST WE FORGET" 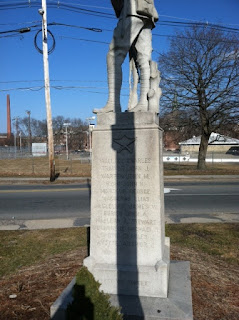 
"Let this statue be always a beacon star which will help you to strive onward that the lives of those it honors may not have died in vain."

I haven't been over to UMASS Lowell's North Campus lately to check out if there was any evidence of a plaque in the memory of Mahlon Webb Dennett, WW1 soldier who lost his life in France.  Thank goodness for the world wide web.  Wikimedia has a photo of a plaque on North Campus!  I'm not sure exactly where it is but it should be near Cumnock Hall. 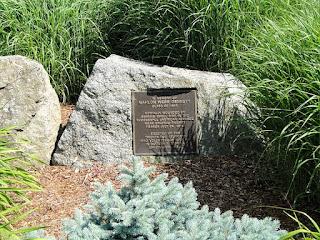 Wikimedia has photos that are in the public domain.  So thank you Daderot whoever you are!!