Mary Agnes Hallaren was born in Lowell on May 4, 1907 to John and Mary (Kenney) Hallaren and she had two sisters and three brothers. The family lived on Second Street in the Pawtucketville section of the city. She went to Lowell Teacher's College (now known as UMass Lowell) graduating class of 1927. She taught junior high school in Lexington for fifteen years. Every summer she went on grand adventures all over the world. She did a lot of her traveling by hitchhiking alone as a single woman with no lipstick and lots of walking.

She was one of the first women to enlist in the Woman's Auxiliary Army Corps, the precursor to the Woman's Army Corps (WACs) during World War Two on July 10, 1942.  She was the first officer not in the medical branch. During her recruitment she stood on her tiptoes to make the five foot minimum height requirement. She was actually 4' 10" tall. When the recruiter questioned her size she told him "you don't have to be six feet tall to have a brain that works."

She was known for her excellent organization skills and command. She was affectionately called "The Little Colonel". She commanded 9,000 women in the European theater. She became the third Director of the WAC in 1947. She served in that capacity through the Korean War and until 1953. She remained in the service until her military retirement in 1960. In 1965 she became the first Executive Director of Women in Community Service in Virginia.

She has received numerous awards, citations, and honors throughout her lifetime. She received the Bronze Star, The Legion of Merit, Croix De Guerre, Legion of Honor, UMass Lowell Distinguished Alumni Award, National Women's Hall of Fame in 1996 and more. She is highlighted in Tom Brokaw's book "The Greatest Generation".

She died February 13, 2005 in McLean, Virginia at the age of 97 and is buried in the family plot at St. Patrick's Cemetery in Lowell, MA. Thank you for your service!
Posted by Eileen at 5:40 PM No comments:

Remembering Bartholomew B. O'Sullivan and the Shenandoah Air Disaster

The United States Navy's first American made Dirigible was the Shenandoah ZR-1. The Shenandoah was 680 feet long and had six 300 HP engines capable of going 60 MPH. It flew on the east coast and was based in Lakehurst, New Jersey. 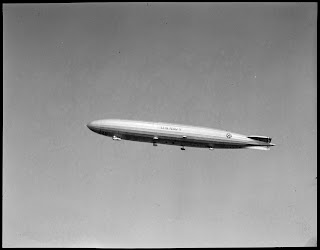 On September 2, 1925 she crashed in three pieces after breaking up in heavy winds over Ada, Ohio. Fourteen men of the crew of 42 were killed.  Chief Petty Officer, Bartholomew B. O'Sullivan a nineteen year resident of Lowell, Massachusetts was killed. He was thirty five years old. 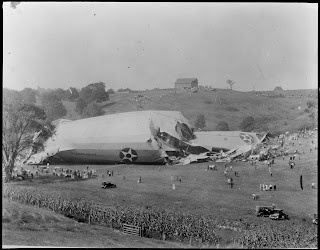 He was born in New York and moved to Andover, Massachusetts as a small child. He graduated from Lawrence High School and Lowell Textile school. He was married to the former Elizabeth Rawley. He left four children; Edward who became Rev. O'Sullivan, OMI of the Immaculate Conception parish, Francis, Bart Jr. and Elizabeth who later married James Dunn.

His funeral was widely attended at Sacred Heart Church on Moore Street. His flag draped casket was carried on the Battery B caisson. The funeral cortege proceeded for burial at St. Patrick's cemetery on Gorham Street. Planes flew overhead to honor the valiant hero. Thank you.

Posted by Eileen at 3:09 PM No comments: