I wrote a guest post on Dave McKean's Lowell Irish blog today about Babe Ruth's visit to Lowell for the St. Patrick's School Alumni Banquet.  Give it a look at:  http://irishlowell.blogspot.com/

Dave does a great job researching and preserving Irish history in Lowell.  When he hooks up with Walter Hickey they are unstoppable. 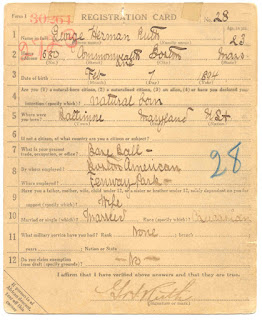 Note:
What is your present occupation? - Baseball
By whom employed? - Boston American
Where employed? - Fenway Park 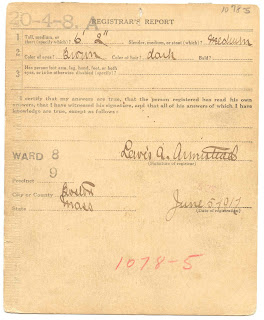 
Babe Ruth did not serve in either World War but he did his part by using his celebrity to raise money for the war effort.  Even in 2012 people are still fascinated by Babe Ruth!

The Sinking of the Lusitania and the Lowell Connection 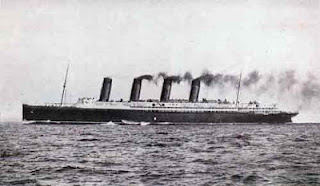 On May 7, 1915 the British steamship Lusitania was torpedoed by a German u-boat off the Irish coast on its way from New York to Liverpool.  The ship sank in 18 minutes with many Americans on board.  The United States had not entered the World War and would not for another two years.  Many people think that this event turned the United States against Germany.

On board the ship were four people with Lowell Connections.

First class passengers, Dr. Frederick Stark Pearson and his wife Mabel Ward Pearson.  Both born in Lowell they were married January 5, 1887.  Dr. Pearson, a Tufts graduate, was a highly successful engineer and entrepreneur who financed and built the Medina Dam in Texas.  Pearson, Texas is named for him and Natalia, Texas is named for his daughter.  They also had two sons.  They were residents of New York and also had homes in Great Barrington, England and Spain.  Their bodies were found and returned to New York for burial.

A second class passenger, Mrs. Jane Goodchild Worden of Riverside Street in Lowell.  Mrs Worden was traveling to Ireland to bring her aged mother back to Lowell to live.  Her body was never found.


Third class passenger Walter Dawson, an English native, resided in Lowell and worked at the Lowell Bleachery.  He made the trip to England to tend to his sick mother.  He survived.

The first to die from Lowell in the Great War were travelers not soldiers.