During the first world war, General "Black Jack" Pershing did not like the telephones lines in France. After being in use for three years by the French before the United States entered the war he needed a better communication system. The United States Army advertised in the U.S. newspapers for bilingual telephone operators. They had to speak fluent French and English and have operator experience. Over 7,000 women applied and 223 ended up being accepted, trained and sent overseas. They were members of the U.S. Army Signal Corps Female Telephone Operators Unit. 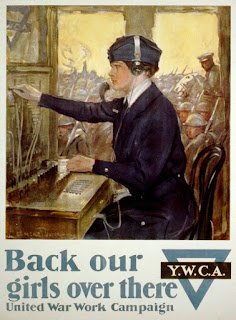 The 3rd Unit's Chief Operator was Nellie F. Snow of Lowell. She was the Chief Operator of the Lowell Telephone Exchange at 115 Appleton Street (now the sober Lowell House). She conducted training in the Lowell for the other women of her unit. The other local woman who went to France in various contingents were Yvonne Gauthier, Leontine LaMoureaux (later Mrs. James O'Connor), Eugenie Racicot and Olive Shaw.

They were sworn in and  had to buy their own uniforms. They went to New York City and boarded a transport ship filled with male soldiers and sailed to France. They arrived in Paris in May of 1918. They were critical to the war effort by providing translation services and some actually went to the front.

After the war many of the woman stayed in France to provide their services to the peace time activities. They were considered the first active duty women to serve in the U.S. Army. Sadly, the U.S. Army did not award the the Victory Medal or any service related bonuses. They said that they were civilian contractors. They fought this until finally in 1979 when the 18 surviving woman were awarded the Victory Medal and veteran's pension benefits as approved by Congress.

Thank you for your service to our country. These talented and brave women did so much more than "number please?"