Lowell Textile Institute had 23 students sign up for the 26th Yankee Division Battery F Field Artillery unit.  They all served together and due to their superior mathmatics they were a great asset at firing the guns.  They were the most accurate of the division's artillery units. 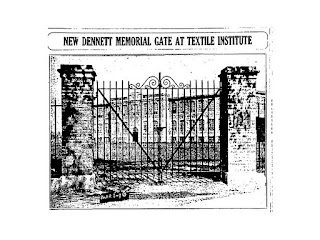 The following is from a speech by Lieut. Russell L. Brown given at the dedication of the Mahlon Webb Dennett Gate on Saturday, May 18th, 1929.

"Mindful of the loss of a comrade-in-arms, these men have arranged to erect a gate at the northwest corner of the school campus, as a memorial to Mahlon Webb Dennett, who died in France.
Corporal Mahlon W. Dennett, son of Dr. D.C. Dennett of Winchester, Mass., was born June 10, 1884.  In 1917 while in his third year as a student chemist, class of 1918, at Lowell Textile Institute, he enlisted in Battery B, 2nd Mass. regiment, which later became Battery F, 102nd field artillery, 26th division, AEF.
As the battery progressed from the training period to actual combat at the front, Corp. Dennett, by virtue of his knowledge of chemistry, was made gas corporal, and after a short schooling in gas technique was made responsible for the safety of the personnel during gas attacks.
It was Corp. Dennett's duty to see that all gas masks were in good condition, that all dugout were properly blanketed, that the men were acquainted with effects and antidotes for various kinds of gas poisoning.  In event of gas attacks he was to sound the alarm and see that all precautions were taken to avoid casualties.  In addition to this Corp. Dennett assisted in helping maintain liason with telephone and rocket posts.
The success of his efforts and faithfulness to duty is shown by the fact that in spite of many vicious gas attacks there was not one death from gas poisoning in the battery.
At the second battle of the Marne after firing steadily for days, the battery moved forward successively until it located on July 24 in an old German gun position on the edges of the woods.  The place was near the front lines and the infantry, advancing to the attack, was breaking from column to skirmish lines of squads directly in front of the battery.  The location was known exactly by the enemy, and soon a terrific barrage was falling on the guns.
During this intensive fire a German 77 m.m. long fuse shell landed at Corp. Dennett's feet as he lay in a shallow funk hole near the guns.  Receiving the full effects of the lateral spray Dennett was mortally wounded.   His torso terribly mutilated, arms and legs broken, the fingers of his left hand cut off, his cry for help was answered by comrades scarcely 50 feet away.  Capt. Lee H. Cover, Capt. Theo R. Johnson and Sergt. R.L. Brown were by his side at once together with Private Burke of the medical squad, who gave first aid and carried Corp. Dennett to the rear under shell fire.  An ambulance carried the wounded man to Mobile hospital No. 2 and later to Evacuation hospital No. 7.
Courage and fortitude alone kept him alive over two weeks.  On the third day he dictated a letter to his father in which he said, "I am out of luck.  I have been wounded, but expect to come out O.K."
The odds against him were too great, however, and on August 10, 1918, he died of sepsis, and was buried at Belleau Woods in France."

So, now back to present day, the gate is long gone.  In 1955, the area in front of Cumnock Hall was renamed as Dennett Mall.  I need to walk the area to see if there are any memorial plaques in his honor anywhere on North Campus.
Posted by Eileen at 5:09 PM 2 comments:

In May 18, 1917 the Selective Service Act was passed which authorized the President, Woodrow Wilson, to increase temporarily the military establishment of the United States.  This is called "the draft", conscription or compulsory military service.

The World War 1 Draft Cards are available for researchers via ancestry.com.  As Veteran's Day approaches I wanted to share a sample draft card with you. 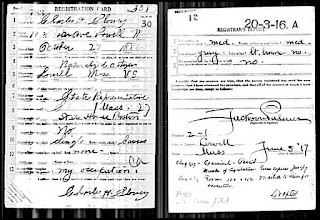 Charles H. Slowey
Draft Card
The reason I picked this card is that Charles H. Slowey was a State Representative at the time and he was drafted and served overseas.  He didn't get any favoritism because of his status, although he did list his occupation as a grounds for exemption.  He is also related to my husband's family.
Charles H. Slowey was born October 27, 1886, in Lowell the son of Charles H and Elizabeth (Bohannon) Slowey.  He served five terms in the state legislature as a member of the House of Representatives.  He was elected Mayor of the City of Lowell for the 1932-33 term.  He also owned the C.H. Slowey Insurance Company.  He was appointed postmaster of Lowell by President Franklin Delano Roosevelt on September 15, 1935 and served for 21 years until his retirement on September 31, 1956.
He was married to Mary C. (Nelson) Slowey.  He died on January 10, 1964 in Lowell and is buried at St. Patrick's Cemetery.
You can get free access to ancestry at most local libraries.  I have found both my grandfather's registration cards and it's really cool to see your grandfather's signature.  Especially when I never got to meet one of them.
Page 1
1.  Name in Full:  Charles H. Slowey  Age: 30
2.  Home Address: 10 Webster Ave Lowell, MA
3.  Date of birth:  October 27, 1886
4. Citizenship: Naturalized Citizen
5.  Where were you born?  Lowell, MA  U.S.
6.  If not a citizen, of what nation are you a citizen of subject:
7.  What is your present trace, occupation, or office:  State Representative
8.  By whom and where employed?  Mass  State House Boston
9.  Have you a father, mother, wife, child under 12, or a sister of brother under 12, solely dependent on you for support (specify which)?  No
10.  Married or single?    Single               Race?  Caucas
11.  What military service have you had?  Rank  none
12.  Do you claim exemption from draft (specify grounds)?  my occupation
Page 2 - Registrar's Report
1.   Tall, medium or short?   med         Slender, medium, or stout (which)?  med
2.  Color of eyes     gray     Color of hair       lt brown               Bald    no
3.  Has person lost arm, leg, hand, foot, eye, or both eyes or is he otherwise disabled (specify)?  no
Posted by Eileen at 12:22 PM 2 comments: