Early Lowell and the Civil War

I was looking something up in Charles Cowley's "Illustrated History of Lowell" and I read something that interested me.

Who was Robert E.K. Whiting and how did end up a Major-General in the Confederate Army in the Civil War? 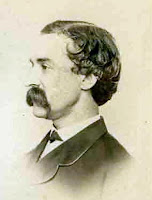 Robert's grandfather and great grandfather served in the American Revolution. Timothy Whiting Sr. and Timothy Whiting Jr. from Billerica. After winning America's independence, Timothy Jr. moved to Lancaster, Massachusetts and settled there. He had thirteen children with two wives. Levi Whiting was born to Timothy and his first wife Abigail Kidder on January 27, 1790.

Levi Whiting was a career Army man in the 1st Artillery and he fought in the War of 1812. He served in the U.S. Army for forty years until his death in 1852. He married Mary Ann Cushing of Maine in 1823 in Biloxi, Mississippi.  They had seven children all born around the United States during Levi's assignments.

St. Anne's Church in Lowell was built in 1825. Levi Whiting and his wife had all their sons baptized at St. Anne's while they were residing in New York: I  tried to determine why would this family come to newly created Lowell for their son's baptisms? They came three different times.

Lowell connections:
John and Frederick do not live to see the Civil War.  His two surviving brothers were William Henry Chase Whiting and Jasper Strong Whiting. They would not survive the American Civil War.

William was a West Point graduate class of 1845 who was number one in his class. Supposedly he had the highest class rank that stood until General Douglas MacArthur graduated.  He served in the United States Army Engineers and surveyed many areas of the country. Jasper Strong Whiting graduated from Bowdoin College and was also a Civil Engineer doing surveying work for the U.S. Army.  It looks like Robert was employed as a surveyor as a private citizen. During the time of the civil war he was the superintendent of Green-wood Cemetery in the Bronx. I can find no record of Robert E.K. Whiting serving in either the United States or Confederate army.

Jasper Strong Whiting enlisted in the Confederate Army with the rank of Major. He died of Scarlet Fever on Christmas Day in 1862 in Richmond, Virginia. He left a wife and infant son.

William Henry Chase Whiting resigned from the U.S. Army in February 1862 and offered his services to the Governor of Georgia. He ended up a Major General defending Fort Fisher at the end the war. He participated in the first battle of Fort Fisher that repelled Benjamin Butler's army. During the second battle of Fort Fisher he was shot two times and was taken a prison of war to Fort Columbus on Governor's Island in New York. He died March 10, 1865 on Governor's Island of dystentry. His funeral was held in New York City and he was buried at Green-wood Cemetery in Brooklyn, NY. His mother, brother and two sisters attended his funeral. His wife had him reburied in 1900 in North Carolina. He left no children.

Robert E.K. Whiting died at Lake George, New York in 1871 and is buried in the Woodlawn Cemetery in the Bronx that he designed and managed. He left a wife, an infant son & daughter. Here is his grave:
The Confederate General that was baptised in Lowell is Robert's brother William Henry Chase Whiting. Because Robert's brothers married Southern ladies and spent such a large portion of their lives in the South their allegiance to the South is not that surprising. There are a few more Lowell connections that I will share in a future post about Major General William Henry Chase Whiting. Stay tuned!

Posted by Eileen at 4:23 PM No comments: