Of the four greater Lowell WW1 veterans to receive the Robert C. McCormick Tribune Medal commemorating the 75 anniversary of WW1, Merle L. Hamilton was the first one to pass away. Here is some of his story.

He was born November 23, 1894 in Deerfield, Massachusetts to William and Lura Day Hamilton. His family moved to Lowell and eventually bought a home at 100 Stedman Street in Lowell. The family kept this home in the family for a long time. 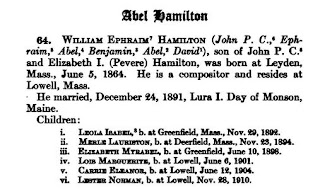 Merle was a chef before, during and after his service. He served with the 317th Field Signal Battalion of the Fifth Army. He had three uncles that served during the Civil War. He received a gun shot wound in the hand when he went looking for war souvenirs in "no man's land" and received the purple heart according to the Lowell Sun. 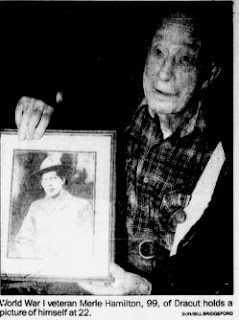 He first married Hazel Fay Hamilton and had four children. Next he married Agnes who passed away in 1984. He lived in different parts of the United States over the course of his career. His service is credited to Bridgeport, Connecticut. He returned to the greater Lowell area after his retirement around 1960. He lived at 62 Flower Lane in Dracut when he received the McCormick medal. He died on March 12, 1995 at the age of 100 of congestive heart failure at the Fairhaven Nursing Home.

We thank Merle L. Hamilton for his service and feeding the troops. We are glad his little adventure to the front did not get him killed.

Posted by Eileen at 1:58 PM No comments: