Paul Edward Kittredge was born December 31, 1890 in Newton, MA to Edward and Mary E. (Walton) Kittredge. The family moved to Lowell soon after having family here. Paul joined the National Guard, the 101st Infantry 26th Yankee Division. He married Sarah R. Hemmersley of Lowell, on September 30, 1914 at the Immaculate Conception Church. They had a daughter Marion Louise born May 27, 1915 and they lived at 95 Andover Street.

Paul was called up for the Mexican trouble and was in charge of recruiting more soldiers in Lowell in 1916. His occupation is listed as Special Policeman. Two days after being promoted to Captain he was killed by a mortar shell on October 23, 1918. He received the Croix de Guerre for conspicuous bravery by the French government. He is buried in the Meuse-Argonne Cemetery in France. 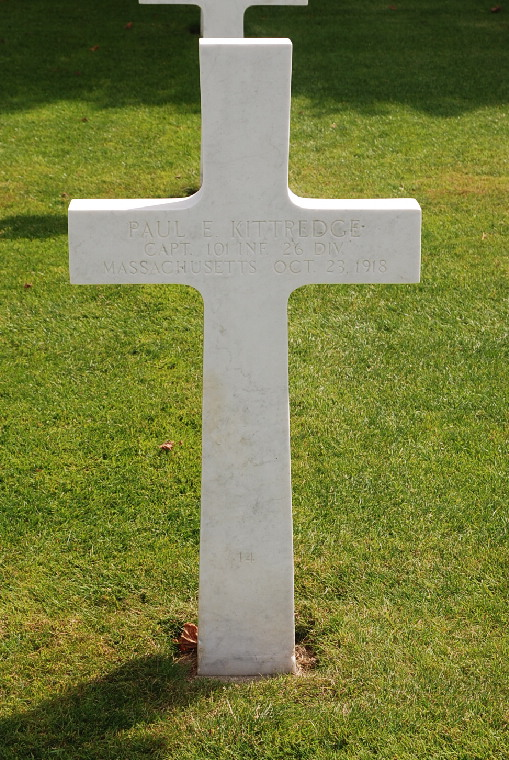 Washington Square at the intersection of Nesmith and Andover streets was renamed Kittredge Park in his honor. His mother sailed to France May 17, 1932 as part of the Gold Star Mother's Pilgrimage tour that was sponsored by the US Government. His wife remarried after the war to Howard Cameron and she died in Norwood in 1965.

He never came home. We thank him and his family for his sacrifice. Think of him when you drive by Kittredge Park.

In researching Captain Kittredge I found the story of his grandfather Captain America Walton. Isn't that a great name? Blog post about him tomorrow on Veteran's Day.
Posted by Eileen at 3:18 PM