In Lowell on the morning of June 6th, 1944 the city's air raid sirens blared at 5:00 AM signaling the dawn of D-day. Thousands attended church services to pray. The largest sea based invasion in history was underway on the beaches of France. 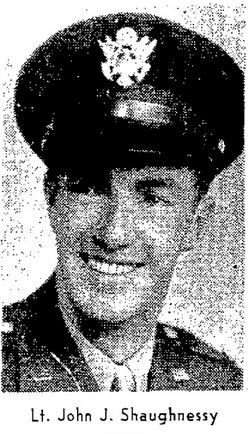 First Lt. John J. Shaughnessy was one of the first 11 boys to enlist in the Army from Lowell on November 9, 1940. During his service he was awarded the Purple Heart in the battle for Tunisia. He was killed in action June 6th during the Normandy invasion. He was the son of Mr. & Mrs. Edward (Anna O'Donnell) Shaughnessy of 1091 Gorham Street. A graduate of Sacred Heart and Lowell High School he was 26 years old. His body was returned to Lowell for funeral services on December 9, 1947. He is buried in St. Patrick's Cemetery.

Ironically, he was named after his uncle, John J. O'Donnell who was killed during World War One. The O'Donnell playground is named for him. John J. Shaugnessy Elementary school, also on Gorham street is named for the World War II hero.

One year after his death a poem written by his aunt, Sister Marcella of the Sisters of Mary, Binghampton, NY and published in the Lowell Sun:

Somewhere in France he is sleeping
Under sacred Normandy's moon
Our hero whose flower of manhood
Was shipped off for heaven last June.

There in the green of the hillside
They laid him beside his men;
Nothing shall shatter his slumber
No one shall hurt him again.

Winds sigh the chant of his requiem
Moonlight illumines his cross;
Soft helpless rain like our teardrops
Echoes the pain of his loss.

Yet his is the truest triumph,
Death brings the perfect peace.
The living will always be militant
Till life and its struggles cease.

We thank this family for their sacrifice and we remember.
Posted by Eileen at 12:36 PM