Walter Burnham was born in Brookfield, Vermont January 12, 1808. His father and brother were doctors. He graduated with his medical degree from the University of Vermont in 1829. He married Annis Crawford February 8, 1831. They had five children. He started his practice in Vermont but moved to Lowell in 1846. 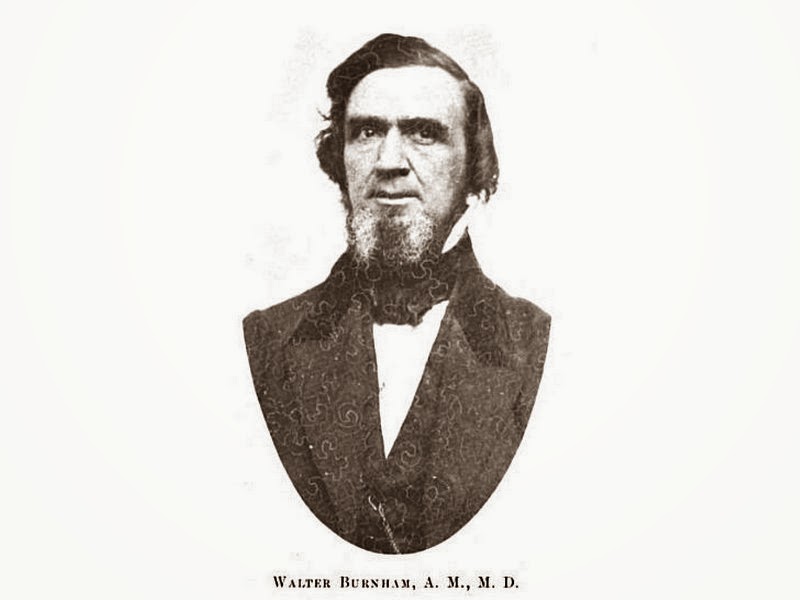 Dr. Burnham was a gynecological doctor. He specialized in removing ovarian tumors.  Now at this time, anesthesia was primitive and these surgeries were very risky.  For the first time in the world, on June 26, 1853 he performed the very first hysterectomy where the patient survived and it happened in Lowell, MA. He performed over 300 surgeries with only a 25% mortality rate which was excellent for the time.

Dr. Burnham also was a state legislator. He was responsible for the Anatomy Act of 1855 which allowed the bodies of dead paupers to be used for medical dissecting purposes. He was a member of the Lowell school committee for many years. He was also a 32 degree Mason and  a member of the American Medical Association.

During the Civil War he was the surgeon for the Massachusetts Sixth Regiment. He was very proud of the fact that his mortality rates for disease were very low for his unit in the Great Dismal Swamp of Virginia. He only lost 13 men to disease out of the regiment of 1,000.

He traveled extensively throughout the Northeast performing operations for those in need. In January  of 1880 he fell in Elmira, New York getting on a train, injuring his elbow. This resulted in an amputation which started the decline in his health. He died February 17, 1888 in Lowell at the age of 75. He is buried in the Lowell Cemetery.

His daughter, Stella married Henry Phelps Perkins an agent at the Bleachery and brother of the Civil War hero, Solon A. Perkins whose framed gideon was just found in the basement of the Lowell Memorial Auditorium.