A Stranger Comes to Town - A German Spy?

Due to the dangerous nature of producing the ammunition and the sensitive security the U.S. Cartridge Company had it's own police force consisting of 32 police guards. The Chief of Police for the company was Martin Conway of Billerica. They had to investigate all employees and all neighbors to ensure the safety of the plants. And they had to guard the weekly payroll. 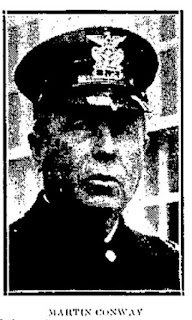 In January of 1916 a man presented himself as Mr. Haines to Mrs. Arthur W. Austin of 218 Wilder Street. He rented a room on Thursday and paid a week in advance. He appeared to be around 40 years old and appeared slightly nervous.

He left during the day and would take his meals in his room. When Mrs. Austin's daughter went into his room to leave some linens, she saw a loaded revolver and lots of bullets. She also saw some maps and charts. Mr. & Mrs. Austin decided to watch his movements. They were not the only ones watching Mr. Haines. A Secret Service detective came to the rooming house and ordered Mr. Haines to leave the city. The Austins found a drawing of the U.S. Cartridge plant on the floor of his room. He was never heard from again.
Posted by Eileen at 1:36 PM