The last Lowell World War One veteran to die was Joseph Leo Rivet. He was born June 16, 1902 in Lowell and he died in Tewksbury at Blaire House September 9, 1996 at the age of 94 of pneumonia. 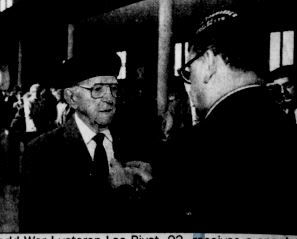 He was born in Lowell June 16, 1902 to Adelard and Marie Louise Rivet. His father died when he was only six years old. His widowed mother was left to raise eleven children alone.

Joseph Leo enlisted in the US Navy during the Great War. I haven't been able to find his service record but he would not have received the McCormick medal if it was not verified. He re-enlisted in the Navy on January 28, 1926. He served with his brother Joseph Viateur on the USS Oglala for four years. 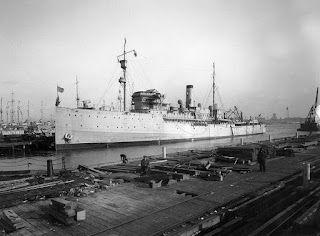 He served during World War I and World War II. He had a thirty year US Navy career. He was a Chief Warrant Officer on minesweepers.  He was a school watchman after his service at the Middlesex Training School in Chelmsford.

He married Alice Perras January 8, 1938 and had a son Bernard. We remember him on this Veteran's Day and every year thereafter. Thank you for your service.
Posted by Eileen at 8:02 PM